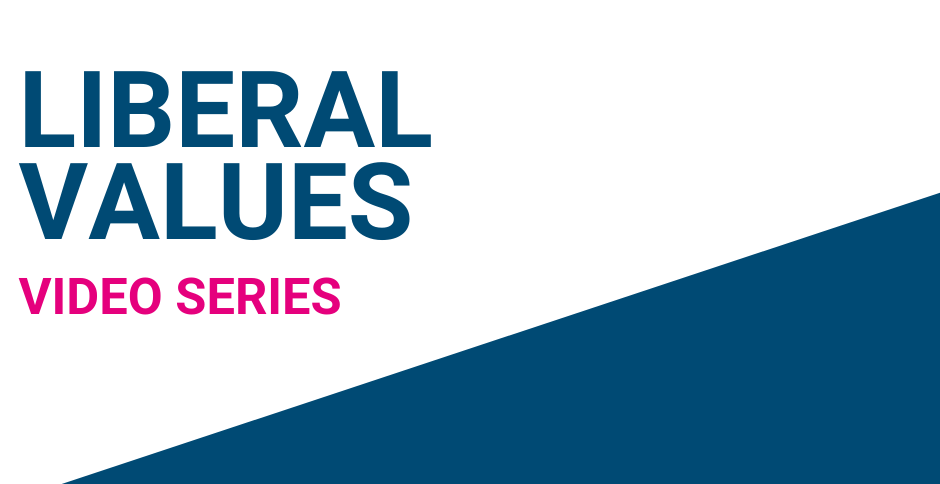 FNF IAF Germany produced video series on the Values of Liberalism: why does individual freedom, the rule of law, tolerance, or accountability matter so much to Liberals?

In this series, FNF IAF I would like to introduce you to some of the different ideas that compose liberalism. Liberalism is a coherent vision made of various components, and that can be grasped complementarily from different disciplines.

Now individualism does not mean some simplistic faith that individuals live in an atomistic way. No. Individuals are social beings and that is also precisely why they need rights: individual rights are to be understood in relation to others.

Liberal Values: The Rule of Law

The rule of law is supposed to protect us from arbitrary state power and maximize freedom, a condition for personal and economic flourishing.

We probably owe the most famous and best defense of freedom of speech to the English liberal philosopher and economist John Stuart Mill in his classic essay “On Liberty”. Why is freedom of speech so important, he argues? Well, first because a silenced opinion could actually be true. And to think that that could not be the case is actually to assume one’s own infallibility.

Spinoza or Voltaire for example were great thinkers who understood the value – the human value – of tolerance. They described the Dutch society and the English society of their respective times as open and thus civilized. Religious beliefs there were a private thing, they did not prevent people from exchanging in harmony in the public sphere. And this atmosphere of tolerance was fostering peaceful relations actually crucial for economic progress.

Trust is like a lubricant in the gears, in the mechanisms of human interactions. Indeed: it lowers what economists call “transaction costs” and, as such, trust is something that makes it easier to do things together, share, exchange and trade.

There is first a moral argument to be made in favor of open borders to people. My individual right to freedom is also a right to move freely, to move the property I have on my own body, as long as I do not encroach on someone else’s private property. The pursuit of happiness should not be blocked by borders.

Democracy presupposes accountability of the polity. This means transparency of public decision-making on spending on the one hand so we can as citizens assess the services we get, and clear taxation, so we can assess how much we pay for these services.